Data: News, The most important and the greatest events in the world for people with hearing disorders | 20-1-2016 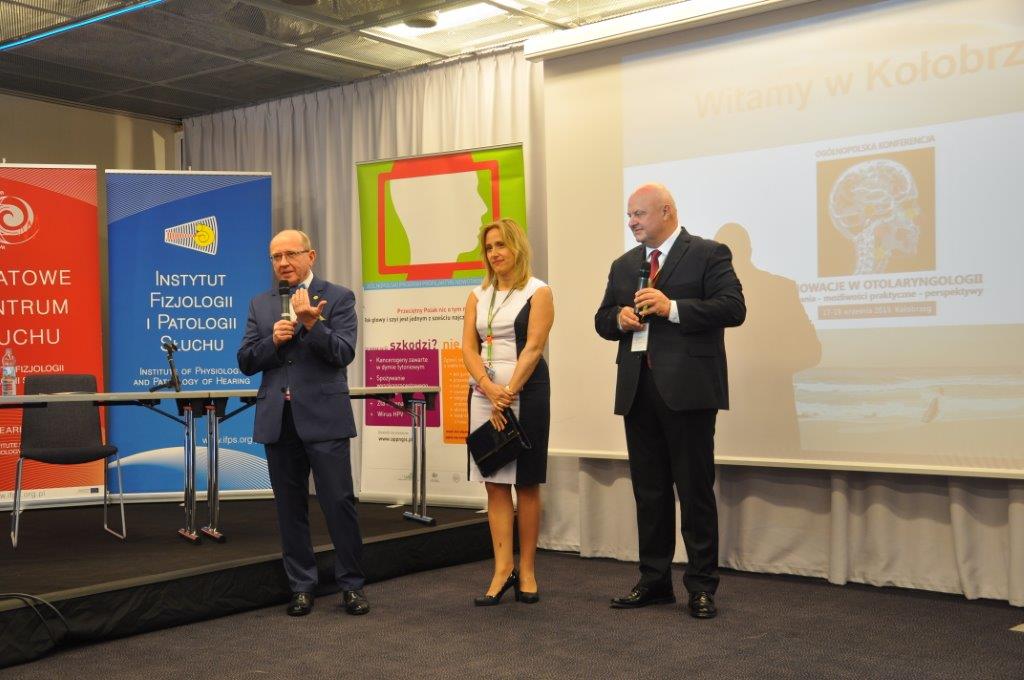 The 1st Polish Conference “Innovations in Otolaryngology” took place on the 17-19th September 2015. It was an occasion to present current trends in oncology, rhinology and general laryngology. Professor Wojciech Golusiński, who officially opened the conference, recalled names of doctors, who contributed to the advancement in the treatment of laryngological diseases. He mentioned, among others, Franciszek Ksawery Jawdyński, a surgeon from Warsaw, who performed oncological operations, which became a standard in this medical discipline. Another person was Przemysław Wiktor Odrowąż Pieniążek, a doctor of laryngology, who as the first one in the world performed tracheobronchoscopy. Professor Jan Miodoński, on the other hand, is considered the pioneer in the surgical treatment of balance and hearing disorders. Professor Golusiński also mentioned the achievements of professor Modzelewski from Szczecin, who in 1972 introduced the technique based on the use of alloplastic materials in the treatment of vocal fold pathology.

“The name of professor Henryk Skarżyński is also on this list of prominent doctors”, said professor Golusiński. He stressed that the achievement of professor Skarżyński, i.a. the first implant surgery in a partially deaf person, initiated the new era in hearing treatment and marked new directions for world centres.

Professor Henryk Skarżyński, in his opening speech, gave a detailed description of the scientific and clinical output of the Institute of Physiology and Pathology of Hearing. “It’s been 25 years since I’ve started working on the deafness treatment programme in Poland. The Foundation of Medicine Development “Homo-Homini” initiated the creation of the institute. In 1993 we opened the first in Poland and second in Europe centre of diagnostics, treatment and rehabilitation of hearing. In subsequent years, we used our experience and observations to start the partial deafness treatment programme”, said professor Skarżyński.

“7 years after the initiation of the programme, in 2009, during the 9th European Symposium Pediatric Cochlear Implant, which took place in Poland, we presented the concept of the holistic approach to the treatment of different patient groups with partial deafness”, added professor Skarżyński. It was the first concept of this type. Apart from the Polish method of partial deafness treatment, the world literature gives also an account of the American method represented by B.J. Gantz, the German method represented by Ch. von Ilberg and J. Kiefer, the Austrian method represented by W. D. Baumgartner i W. Gstoettner, and the Australian method represented by R. Briggs, the Japanese method represented by S. I. Usami, and the Belgian method represented by P. van de Heyning. Currently, depending on the type of a disorder, one of many possible procedures can be chosen – the hearing can be amplified acoustically by means of hearing aids and middle ear implants; it can be supplemented by means of a cochlear implant, or simultaneously acoustic (hearing aid) and electric (implant) can be used. Even though a patient has non-functional residual hearing (it cannot be amplified with a hearing aid), non-traumatic surgery is performed to preserve the inner ear structures. Thanks to this, patients, including those small ones, will be able to benefit from future technologies. “Today we talk a lot about the preservation of the inner ear structures”, said professor Henryk Skarżyński. He presented the minimally invasive surgery that allows the preservation of those structures. “After several years of using this technique that consists of 6 steps we can talk about such a minimal puncture and electrode insertion that preserve normal hearing up to 1500 Hz”, said professor Skarżyński. “We’ve done impressive work in the field of partial deafness treatment”, he said. He also reminded of the results of published studies of specialists from Kajetany. The studies show that the simultaneous use of the electric and acoustic hearing is possible and that many patients treated for partial deafness preserve their residual hearing after implantation.

For several years the specialists in the Institute use the most technologically advanced solutions in partial deafness treatment, e.g. short electrodes – 28-31 millimetres implanted in patients with non-functional residual hearing, and 16-19 millimetres in patients with hearing up to 1500 Hz. Thanks to this innovative approach and technological advances in the field of hearing implants, specialists from the Institute of Physiology and Pathology of Hearing developed new indications for implant surgery. Not only people with profound hearing loss but also those with less severe defects, including senior people (65+) can benefit from this method of treatment. The result of work of professor Skarżyński and his team in 1997-2015 is 1500 publications and presentations on partial deafness. Specialists from Kajetany were present at all big conferences and congresses in the world.

In 2009 professor Henryk Skarżyński as the first one proposed the idea of the holistic approach to the treatment of various groups of patients with partial deafness. It was his and doctor Artur Lorens initiative in 2012 to organize in the World Hearing Centre a meeting of 43 specialists, whose task was to develop a common strategy to present treatment results in patients with different types of hearing loss.

Currently, many centres in the world are interested in the therapy of partial deafness. Nevertheless, there had been no system to compare the results of different solutions in the treatment of patients with various hearing disorders. “It is hard to tell which method is the best in a given case without referring to a specific system”, said professor Skarżyński. In 2013, specialists from the world meet and developed a method that allows comparing the results. Professor Skarżyński stressed that having such system we can not only exchange experience but also look for new, better solutions in partial deafness treatment.

Partial deafness was one of the major themes of the conference in Kołobrzeg. Professor Henryk Skarżyński and Ass. Prof. Artur Lorens talked in their presentations about the use of middle ear implants in PDT. Among other themes there was genetics. Ass. Prof. Monika Ołdak together with the team of the Department of Genetics presented the results of research in the genes responsible for hearing loss. The remaining speeches related to the results of other research and studies performed in the World Hearing Centre, i.a. about brain activity in partially deaf and tinnitus patients, central auditory disorders, bioelectric brain activity and different solutions in the assessment of the otoacoustic emissions. Abstracts of works presented during the conference in Kołobrzeg are available in a supplement to the “Nowa Audiofonologia” journal of September 2015.