One of the foundations of the modern society is the unprecedented progress in human relations, availability and exchange of information, development of information technologies and tools. An integral part of this development is the utilization of our sense of hearing, voice, speech and language communication. While at the beginning of 20th century individual’s functioning and position in the society were dependent in more than 90% on his manual skills, today they are determined by his communication skills. Good hearing is indispensable. At the same time ageing societies, especially in developed countries, have more and more problems with different degrees and types of hearing loss.

It is difficult to remain active without well-functioning sensory organs, vision or hearing. But in the modern world a growing number of people, particularly the elderly, have problems with hearing. It not only hampers their communication, but also increases the risk of other disorders. Available data shows that between 8,1 and 14,6% persons above 60 y.o. declare communication problems related to deterioration of hearing. Above 75 y.o. it is already 27,7 – 40,3% (Davis 1989). The risk of depression is twice higher in elderly persons with mild hearing loss, in these with moderate hearing loss – three times higher, and in patients with profound hearing loss as much as five times higher. Moreover, seniors after 65 y.o. with hearing disorders may suffer from cognitive disorders (33%), episodes of loss of memory (80%) and increased risk of Alzheimer disease (90%). More than 60% of patients with different types of hearing loss suffer from tinnitus.

Hearing check-up is recommended for seniors every three years. Unfortunately in Poland the majority if patients sees the doctor 10-15 years after the onset of first symptoms – when their hearing loss becomes difficult to ignore.

A good news is that today we can help almost every patient with hearing loss – from a little child to centenarian. In the World Hearing Center of the Institute of Physiology and Pathology of Hearing since many years, thanks to the development of surgical techniques, Polish patients have access, sometimes as first or one of the first in the world, to the newest technologies. In the Institute many different hearing improving surgeries are performed for the first time in the world, in Europe, or in Poland. Likewise on 3rd September 2014 Prof. Henryk Skarżyński implanted – for the first time in Poland – a new middle ear implant MET®.

Implant MET ® is designed for following groups of patients:

Hearing loss and what next? 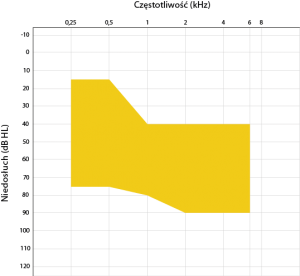 Almost everyone’s hearing deteriorates with age. Hearing loss becomes a problem what it is severe enough to hamper social contacts, when participating in conversations becomes difficult or impossible. Some people start to limit their social life, because they feel embarrassed when they have to repeatedly ask they interlocutors to repeat a word or sentence they did not catch. They lose confidence,  ability to focus, some resign from any social life. Hearing loss may even be a risk for health and life, when we cannot hear cars on the street or warning signals.

According to the WHO data, more than 328 million adults and 32 million children in the world suffer from severe to profound hearing loss. There may be different causes: genetic disorders, complications during pregnancy or birth, infectious diseases such as meningitis, chronic otitis, extended exposition to noise, ageing and others. Epidemiological date shows that three in four 70 year-olds have serious problems with hearing.

Following the information collected on continental and global scientific congresses there are more than a milliard people for whom hearing problems influence their day-to-day functioning, particularly social communication.

Today we know many way to treat hearing loss. Some types of hearing loss may be treated medically or surgically. For millions of people with hearing loss new and increasingly sophisticated hearing aids are a very effective solution. There is a large group of people, however, for whom such solutions are inefficient. For them modern medical science created different kinds of auditory implants – one of the most technologically advanced devices known to modern medicine.

The type of solution applied in a given case depends from the degree and type of a hearing loss.

Conductive hearing loss is caused by problems in the outer or middle ear. Inner ear functions normally, but there damage on the pathway of transmission of the sound to the cochlea. Typical causes are ear infections, poor Eustachian tube function, perforated eardrum, fluid in the middle ear, disruption or fixation of the ossicles due to e.g. otosclerosis.

Sensorineural hearing loss is caused by problems in the inner ear of auditory nerve, when there is a problem with the detection and transmission of sound to the brain, caused, for example, by damage to the hair cells. Typical causes are ageing, exposure to excessively high noise levels, genetic disorders, medications and other substances with harmful effects on hearing.

Mixed hearing loss is a combination of conductive and sensorineural hearing loss, when there are problems both in the outer or middle ear and in the inner ear or auditory nerve.

– MET® is an implantable device improving hearing, combining the newest technological solutions in the field of hearing aids with the advantaged of middle ear implants. Implant system MET® enables high amplification of the acoustic signal assuring at the same time high quality of sound. – said prof. Henryk Skarżyński before surgery – It is a system designed for people with sensorineural or mixed hearing loss od moderate to severe degree. The device works on the principle of transmission of sound vibrations directly to the ossicles. So it bypasses the outer ear, when for various reasons other, traditional solutions are not applicable. 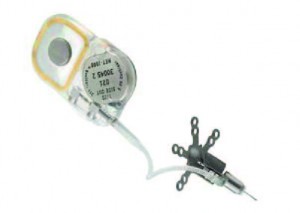 Implant system MET® comprises of the external and internal parts. External part is the Button® sound processor worn under hair on the skin behind the ear and fixed by magnet to the coil implanted under the skin. The processor is light and relatively small (diameter 3,5mm), powered by a single battery size 13 allowing more than 50 hours operation. It is produced in 4 different colors (black, grey, brown and beige), so it can be discreetly hidden under the hair.

Internal (implantable) part comprises two elements: the implant body placed under skin on the bone of the head behind the ear, and the actuator placed in the mastoid bone and fixed to the ossicles in the middle ear (most often to the incus, but can be also fixed at the stapes, oval window or round window).

Sound processor captures sounds, regulates the desired amplification, filtering and adjustment and then sends the signal to the implant via the coil. Implants converts it into an electrical signal which is sent down the lead to the actuator. Actuator is a kind of a small motor converting the electrical signal into mechanical vibrations that directly drive one of the ossicles. From that point the hearing process happens like in normal hearing.

Implantation of the MET® system 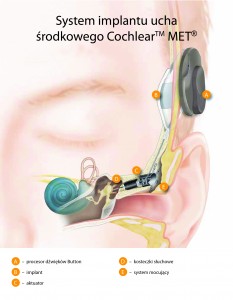 During the operation surgeon performs small cut in the skin behind the ear and then drills an opening in the mastoid bone. Then an implant body is placed under the skin and the actuator fitted to the special fixation system and its tip loaded on the proper ossicle or window of the cochlea. The surgery is performed under general anesthesia and takes 1-2 hours.

– It is hard to evaluate today the number of patients who will be qualified for these operations. I think it will be many patients representing all age groups, but most of them will be elderly, as in the age group over 65 years almost one in three persons has severe hearing loss. – says Prof. Skarżyński.

The entire surgery had been transmitted live on the internet.

Thanks to the newest teleconferencing technique available in the World Hearing Center, used i.a. for the continuous medical education, pioneering surgeries performed by Prof. Henryk Skarżyński are being watched by surgeons and students globally. These innovative technologies have been in use in the World Hearing Center for more than 10 years, when the team of engineers and other specialists under the direction of prof. H. Skarżyński  undertook first theoretical and then clinical studies on telemedicine. In 2005, first steps had been taken to introduce the remote fitting of hearing implants in the special, rapidly growing group of patients with partial deafness. In 2007 first results were presented internationally. This new telefitting method had gradually been introduced into the clinical practice. Very good results achieved with this method in pilot studies, systematically complemented with elements of telerehabilitation, brought about gradual implementation of another idea of Prof. Henryk Skarżyński – the ‘National Network of Hearing Telerehabilitation’, encompassing finally 20 centers located all over Poland.

Today the National Network of Teleaudiology uses the newest software and videoconferencing equipment and unique procedures for testing, measurements and fitting of electric stimulation parameters. It enables cooperation of many specialists: clinical engineers, physicians, speech therapists and psychologists in order to assure comprehensive postoperative care for all patients, specially for the cochlear implant users.

How soon patient can use his implant?

After surgery the incision is sutured and patient wears dressing over it, removed after 6-10 days. However, before patient will be able to use his implant, the wound must be completely healed. Usually the first activation of the system is 6-8 weeks after surgery.

During the first activation of the implant, trained hearing aid technician or clinical engineer will connect implant system to the computer to perform hearing tests. Sound processor will be programmed based on patient’s responses. Patients will be trained how to use and maintain the device.

After the activation, patient will start hearing again sounds that he has missed hearing for a long time. He may need time to get used to hearing them again. Sometimes in this initial period patient may need several follow-up visits to adjust the programming of the processor to patient’s evolving hearing abilities and needs. Afterwards he should regularly schedule control visits.

– I am glad that it is already fourth pioneering surgery performed since opening of the World Hearing Center in 2012 – says Prof. Henryk Skarżyński. – Creating the Center I hoped that its clinical work will bring unparalleled benefits to Polish patients, giving them – sometimes as the first in Europe or in the world – access to the newest and most advanced medical technologies. 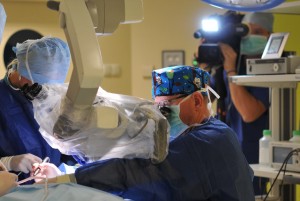 Pioneering implantation MET® system is another proof of high position held by the Institute of Physiology and Pathology of Hearing on the international clinical and scientific arena. In the coming years it will take a very active part in promoting Polish science and medicine in the world. The Institute has been entrusted with organizing several top-ranking international scientific congresses, of key importance in otolaryngology, audiology and phoniatrics. In 2017 Warsaw will host the 12th World Tinnitus Conference and the 25th International Evoked Response Audiometry Study Group Biennial Symposium (IERASG), one year later the 5th International Symposium on Otosclerosis and Stapes Surgery, and in 2020 the 35th World Congress of Audiology. In the meantime will take place the regular international otosurgery and rhinosurgery workshops organized in the World Hearing Center in Kajetany.