First Pole to become a member of the American Neurotology Society

Professor Henryk Skarżyński, founder and director of the Institute of Physiology and Pathology of Hearing and the World Hearing Center in Kajetany has been accepted as a member of the prestigious American Neurotology Society. He is the first member from Poland in the history of the society. The Gala Ceremony, where new members has been welcomed into the Society, took place on 24 April 2015 in Boston, USA. The President of the ANS, Mr Anil K. Lalwani (Columbia Cochlear Implant Center) underlined in his letter of congratulation for Prof. Skarżyński that it was a unique moment in the history of the Society, as in the 2015 it celebrates its fiftieth year. He added also that the rank of the Society depends on its membership, and thus he is glad to welcome such an outstanding otosurgeon as Prof. Skarżyński in their midst. 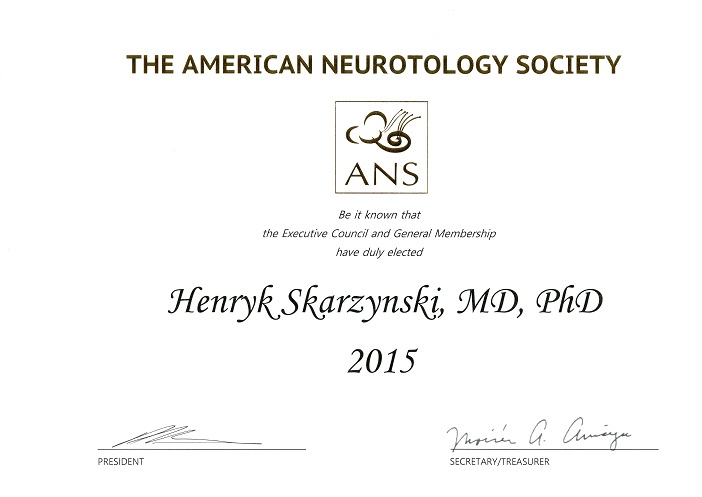 The group of American neurotologists presented their program for the first time on 14 November 1965, during the 7th Annual Meeting of the American Academy of Ophthalmology and Otolaryngology (present name: American Academy of Otolaryngology – Head and Neck Surgery) in Chicago. The meeting of the group met with a skepticism of the Academy, demonstrated by its assignation of the room for this meeting – in the basement of the Palmer House hotel, where the Academy met.

Activities of the Neurotology Group has been in 1974, when the American Neurotology Society was officially established. The Society soon became a valued and influential member of COSM – Combined Otolaryngology Spring Meetings.

In 1965 – 69 the Neurotology Group met one or two times a year, organizing 2 hour-long panels on topics related to audiometry, nystagmography, auditory diagnostics and balance disorders. These meetings were continued in following years, and new committees were created, such as the Vestibulology Committee, which co-organizes annual workshops on topics related to neurotology. In 1975-79 many studies on the Meniere disease have been published, representing different approaches to management and rehabilitation of this disease.

In 1980s meetings of the Society became longer, as the number of studies presented rapidly increased. The range of topics widened as well to include tinnitus, sudden deafness, applications of CT in inner ear disorders. 1980s represent also the time of development of many diagnostic procedures related to introduction of new diagnostic devices.

Today, the activities of the Society focus on assurance of the continued education for its members, aimed at increasing of the knowledge and practical skills of physicians.