A Program of Hearing Screening in Primary School Children in Rural Districts will begin in a new school-year. It will encompass more than 140 thousand students, mostly first graders. In future, we are planning to create the first in the world network of telediagnostics and telerehabilitation, said Prof. Henryk Skarżyński at press conference in the PAP Press Centre on 19 August 2015.

New hearing screening program will be implemented in two stages – first in eight voivodeships in eastern part of Poland and later in eight voivodeships in western Poland. Partners in this program are: the Levy Fund of Agricultural Social Insurance, the Agricultural Social Insurance Fund (KRUS), the Institute of Physiology and Pathology of Hearing and the Association of Friends of the Deaf and Hearing Impaired ‘Homo-Homini’. Honorary patronage of the Program holds Minister of Agriculture and Rural Development, Mr. Marek Sawicki. Scientific patronage holds the Clinical Science Committee of the Polish Academy of Sciences. 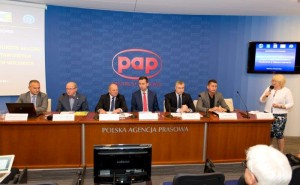 – The Program is aimed at early detection of hearing disorders in children beginning school. The earlier they are diagnosed, the bigger their chances for effective treatment and rehabilitation – said Prof. Henryk Skarżyński at the conference. – This is a chance for children, for whom hearing disorder may be an obstacle in learning (e.g. child sitting in the last row would not be able to hear well what the teacher says) to have access to same development and education opportunities as their hearing peers.

– It is better to prevent than to treat – said the Minister of Labor and Social Policy, Mr. Władysław Kosiniak-Kamysz at the conference. – Hearing screening is a perfect example of this principle. Each złoty spent on prophylaxis means savings in costs of medical treatment. So it is an investment, not an expenditure. This action enables changing the lives of hard-of-hearing children, preparing them better for professional activity, which is a first step of the senioral policy. Today, we pay attention not only to the length of life, but also to its quality. Quality of life of people who are diagnosed and treated early is significantly better. After hearing screening in children is it worthwhile taking another step to start testing people working in professions particularly risky for hearing, such as fire fighters. It is worth reaching also the elderly, who sometimes have no idea that their hearing is deteriorating and how their life could improve if they were provided with e.g. hearing aid. For senior citizens such test could mean returning to normalcy. Prophylactic examinations encompassing all groups – from children to seniors – comprise a part of a cohesive pro-family policy – added the Minister Kosiniak-Kamysz.

Among parents of children diagnosed with hearing loss, 60% did not even suspect that their children have problems with hearing. Without hearing screening examinations in schools, most students with hearing loss would never undergo hearing test. Particularly in small towns and villages where access to specialists is more limited than in large cities.

– For the majority of children from rural areas, hearing screening is the only chance for early detection of hearing loss. Present program creates on opportunity to restore school medicine – said Prof. Henryk Skarżyński.

– One third of inhabitants of rural areas is no more than 40 years old. For comparison – in the European Union this ration has fallen to only 8% – said Mr. Marek Sawicki, Minister of Agriculture and Rural Development. – Families in rural areas are often larger, thus it is worth seeing to their better start in life and health. This is why we want to expand health prophylaxis to include not only hearing screening conducted by the Institute of Physiology and Pathology of Hearing co-financed from the Levy Fund, that is contributions of farmers – addded Minister Sawicki.

Prof. Henryk Skarżyński reminded at the press conference that long experience of the Institute in the field of hearing screening provided the groundwork for development of a program for equalization of chances of children with communication disorders, which was a priority of Polish presidency in EU Council in health area. There activities resulted in adoption of “EU Council Conclusions on Early Detection and Treatment of Communication Disorders in Children, Including the Use of e-Health Tools and Innovative Solutions” at the meeting of the Employment, Social Policy, Health and Consumer Affairs Council (EPSCO) in Brussels in December 2011. This means that other European countries began implementing solutions tested in Poland.

Prof. Skarżyński underlined that hearing screening does not confine itself to detection of hearing disorders. If test results are abnormal or dubious, child is not left without help, but is referred for more detailed diagnostics and treatment. Hearing screening conducted on such a large scale and treatment of small patients with hearing disorders id possible thanks to telemedical solutions. Results of screenings conducted in schools are sent to the center in Kajetany, where they are processed and analyzed by experts from the Institute of Physiology and Pathology of Hearing.

– Using telemedical applications already tested by the Institute we could create a first in the world network of telediagnostics and telerehabilitation – said Prof. Henryk Skarżyński. This idea has won the support of Mr. Artur Brzóska, President of the KRUS.

– We would like to support establishment of model diagnostic centers in locations allowing easiest access for inhabitants of small towns and villages – said President Brzóska suggesting that this new network could be developed basing on local rehabilitation centers.

– Innovativeness in Poland does not receive sufficient funding – said Albert Dziura, Chairman of the Board of the Levy Fund of Agricultural Social Insurance. – This makes me even more glad that in collaboration with the Institute of Physiology and Pathology of Hearing we have a chance to create an innovative solution in service of children. A relatively inexpensive examination (about 17 złotys) may alter lives of children who, due to hearing disorders which had not been discovered on time, could lose a chance for education. In future, these children could work to support themselves, not being dependent on help from others.

New program of hearing screening in children in rural districts and an idea of creating the first in the world network of telediagnostics and telerehabilitation has won the support of Mr. Marek Sawicki, Minister of Agriculture and Rural Development and Mr. Władysław Kosiniak-Kamysz, the Minister of Labor and Social Policy.