Prof. Henryk Skarżyński is the most influential person in Polish medicine

List of 100 published by „Pulsu Medycyny” it is a ranking of the most important names in Polish medicine. Jury, comprised of the representatives of the world of science, politics, healthcare managers and representatives of associations of producers of pharmaceuticals and medical products, evaluated the achievements of candidates in spheres of treatment, introducing novel technologies and therapies into medical practice, being at the cutting edge of progress in Polish medicine, as well as their influence on legal regulations, organization and functioning of Polish healthcare system. 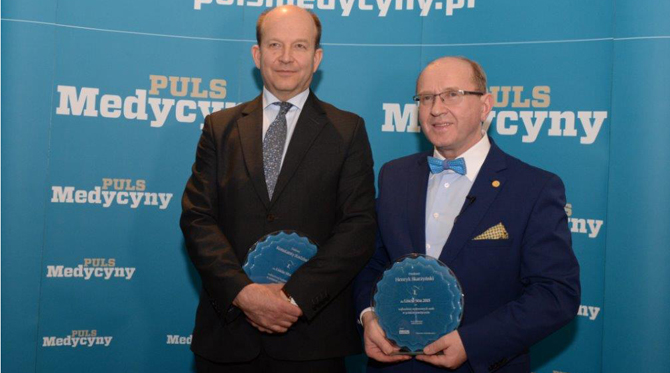 The Jury of „Puls Medycyny” has rewarded Prof. Skarżyński for his immense impact on development of Polish otolaryngology, audiology, phoniatrics, rehabilitation and biomedical engineering, as an author of several ground-breaking methods of treatment of hearing disorders in adults and in children. Prof. Skarżyński had held the second position on the list last year, thanks to his teaching and organizational achievements, and had been listed high in this ranking also in the previous years.

– Laureate’s biography is incredibly rich, it could fill several medical CVs. In 1992, he was the first surgeon in Poland and in Central and Easter Europe to perform cochlear implant surgery, thus putting in motion the hearing implant program in Poland. He is an author and co-author of more than 2,5 thousand Polish and international research papers, including more than a thousand in IP journals. He was a promoter of 19 doctoral theses and 4 habilitation theses. He is a member of scientific societies of global scope in medical fields related to ENT, audiology, phoniatrics, rehabilitation and clinical engineering. (…) In 1998, he performed the first in Poland brainstem implantation and in 2003, middle ear implantation. In 2002 he initiated first in the world program of partial deafness treatment in adults and in 2004 in children. This method is worldwide known as the Polish specialty, the ‘Skarżyński method’. Moreover, he developed a novel electrode to be used with this approach, and clinical procedure which has been implemented in several CI centres worldwide. He is an author of the unique telemedical programs: “I Can Hear…”, “I Can See…”, “I Can Speak…”. In 2010 he presented to the world the first National Network of Teleaudiology. He is an author of the first in the world concept of the Partial Deafness Treatment PDT. His method of surgical approach to the inner ear through the round window has been proven to be an exceptionally effective procedure for partial deafness treatment.

In 2011 he initiated and coordinated a program ‘Equal opportunities for children with communication disorders in European countries’ – the priority of Polish presidency of the EU. He was a chief mover of the European scientific consensus statements on these topics, signed by the leaders of European societies of audiologists, phoniatricians, speech therapists and ophthalmologists. These activities resulted in the adoption of the ‘EU Council Conclusions on Early Detection and Treatment of Communication Disorders in Children, Including the Use of e-Health Tools and Innovative Solutions’ in 2011.

His major scientific, clinical and educational achievement was development and implementation of the idea of the World Hearing Center in May 2012.

He received many state awards from the Prime Minister, Minister of Health, Minister of Science and the Minister of Foreign Affairs, from medical associations and many prestigious Polish and international decorations. His innovation activities had been awarded on the international innovation exhibitions in Brussels, Paris, Geneva, Washington, Nuremberg, Seoul, Kuala Lumpur, Taiwan, Sevastopol, Moscow and Casablanca. He is an author or co-author of 14 patented solutions. The President of Poland awarded him the Polonia Restituta Knight’s, Officer’s and Commander’s Crosses and state decorations from the King of Belgium, the President of Georgia and the President of Ukraine. He received the Papal Order Pro Ecclesia et Pontifice for his work for human and common good, and from the Cardinal Kazimierz Nycz – a medal ‘of Merits for Roman Catholic Archdiocese of Warsaw’. He is the first Pole in the history to be accepted as member of the American Otological Society and the American Neurotology Society.

Out of over 400 different awards and decorations which Prof. Skarżyński received, some are particularly dear also for me – concluded Prof. Alicja Chybicka – First is the Silver Asclepius awarded in students’ competition Primi Inter Pares, then award from the Polish Business Club for the Event of the Year in Medicine (1992), Medal Gloria Medicinae – for the outstanding contributions in the field of medicine awarded by the Polish Medical Society, the Honorary Pearl, the ’Golden Scalpel’, ‘Golden Otis’, Super Icebreaker, the order ECCE HOMO for sacrifice for other people, profound medical expertise in relation to hearing and speech, dedication to bringing happiness to people through restoring hearing and returning people to the world of sounds. And last decoration, especially dear to any doctor, is the Order of Smile awarded by children. (…) I cordially congratulate Professor Skarżyński!

Prof. Henryk Skarżyński was moved: – I am very happy that ‘Puls Medycyny’ had included me in their List of 100 for many years, with such an eminent group of experts. This distinction, this year, is particularly important for me and my team. This year we are celebrating two anniversaries: 25 years of the first in Poland program of treatment of deafness and 20 years since establishing of the Institute of Physiology and pathology of Hearing. This is a special year for us and this honour pleases us immensely. Being named the most influential person in Polish medicine in 2015 I would like to underline that for me the most important is to be able to help the other people as a physician. I am happy to observe that in my specialty Polish patients can benefit from the newest technologies. I treat each patient to the best of my abilities, in such way as I could wish for myself to be approached, if I needed help.

– Minister Radziwiłł and his new team are surely a wise continuum. He has shouldered a difficult and responsible task of leading a Ministry, which there are 38 millions of Poles who know better how to do it. You are a right person in the right place, not only in the Ministry, but also in this ranking. (…) I believe that the Ministry of Health will stay above the divisions, because the most beautiful mission for a politician in medicine is to serve people, and this motto is common for all. (…) I wish you, Minister, and your team many successes to mirror the strength of science, medicine and pharmacology and win the respect of medical practitioners and hospital managers. I congratulate you and wish you success!

– I know the List of 100 very well and, like probably every healthcare employee, follow it very closely every year – said Minister Konstanty Radziwiłł during the ceremony – I think that the most important person in healthcare should every year be the Minister of Health. If he is not – it is a signal that something is wrong. (…) The List of 100 of a kind of expert peer review, and I will treat this distinction as an expression of trust and positive evaluation of reforms we are planning to introduce in our Department – added Minister Radziwiłł.