2nd International Music Festival for Children, Youths and Adults with Hearing Disorders “Beats of Cochlea” has come to an end

The Festival culminated in the Gala Finale that took place in the Fryderyk Chopin University of Music in Warsaw. Around 700 guests arrived to see the concert. The organizer of the event was the World Hearing Centre of the Institute of Physiology and Pathology of Hearing with the support of the Fryderyk Chopin University of Music and the Institute of Sensory Organs.

International Music Festival for Children, Youths and Adults with Hearing Disorders “Beats of Cochlea” is the most important event in 2016, which is the jubilee year for the team of the Institute. 25 years ago prof. Henryk Skarżyński has initiated the deafness treatment program in Poland and 20 years ago the institute of Physiology and Pathology of Hearing has been created. There is no other similar centre in Poland which would get such a high position nationally and internationally. The method of deafness treatment created by prof. H. Skarżyński is called “the Polish school of otosurgery”. 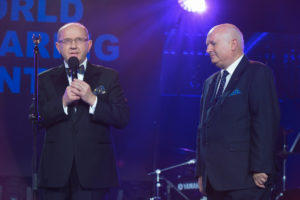 The Festival “Beats of Cochlea” is the author’s project of prof. H. Skarżyński, who in 1992 performed cochlear implantation in a deaf person. The idea was also to show to the wide audience the musical talents of people who returned to the world of music thanks to the advancement in science and medicine. This year it was the second edition of the Festival. Prof. Henryk Skarżyński and prof. Ryszard Zimak welcomed the gathered audience.

– The achievements in different disciplines can be measured differently. Organizing such events we can feel our mission. – said prof. Henryk Skarżyński welcoming the guests. – For scientists the mission is to investigate and discover something. For the people of medicine, the mission is to correctly implement what scientist had discovered and to help the patient. Then everyone feels satisfied. Today we all have a chance to fulfil one more mission: with our presence here we support the application of modern achievements in medicine. Thanks to this patients can pursue their musical goals and perform in front of such a great audience. I want to thank you for this support. I’m really glad that the 2nd Festival takes place in the oldest Polish university of music. I wish you many positive emotions and unforgettable experiences – said prof. Henryk Skarżyński.

In 2016 the organizers received about 150 applications from the whole world. 30 participants were invited to Poland. There were people from such countries as Ecuador, China, Kazakhstan, Ukraine, the USA, Canada, Italy and Spain. All participants have cochlear implants thanks to which they can sing or play instruments. Among participants there were musicians who played on very rare instruments such as guzheng, lute, zither, and Kazakh national instrument.

The laureates performed accompanied by the Polish Radio Symphony Orchestra under the direction of Prof. Krzesimir Dębski and the Warsaw University of Technology Academic Choir. 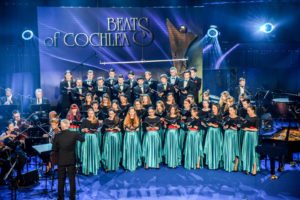 -This is a big moment for a musician who experiences the return to the world of sounds and witnesses how those very young ones as well as adults can hear the music again. – said prof. Ryszard Zimak, the head of the Jury. – I cannot imagine a more beautiful moment for the Fryderyk Chopin University of Music. I want to pay tribute to prof. Henryk Skarżyński and his team for their effort to make the music dominate this place. – added prof. Zimak.

The concert was opened with an anthem sung by the duet Barbara Kaczyńska and Maciej Miecznikowski. The music was written by prof. Krzesimir Dębski to the lyrics by prof. Henryk Skarżyński. 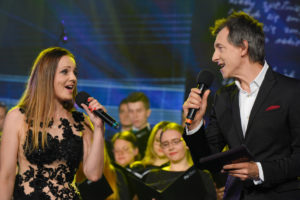 Apart from the laureates, during the Concert the audience could listen to performances of guest artists, who also have the history of hearing problems. Maciej Miecznikowski, a renowned multi-instrumentalist, dr. Alicja Węgorzewska-Whiskerd, world-famous opera singer, Barbara Kaczyńska, a graduate of a 2nd grade music school, a worker of the Institute of Physiology and Pathology of Hearing and the arts director of the Festival, Jan 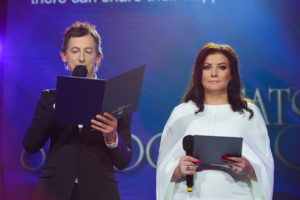 Bukowski, a student of a music school with beautiful baritone voice who underwent a surgery performed by prof. Henryk Skarżyński, Olivier Palmer, a young musician with unique voice who was born deaf. There were also a Spanish band called Mayor Tom, two laureates of the previous edition Estera Łabiga and Grzegorz Płonka and Johanna Paetzold, opera singer who is a cochlear implant user. She sang her own song written specially for this occasion and was accompanied by the Polish Radio Symphony Orchestra.

The hosts of the Gala Concert were dr. Alicja Węgorzewska-Whiskerd and Maciej Miecznikowski.

The Concert was proceded by a press conference that took place in the University of Music on 12th July. During the conference prof. Henryk Skarżyński, the creator and initiator of the Festival, summarized the Polish achievements in the treatment of hearing disorders. Thanks to those achievements in the 21st century hearing disorders are not an obstacle in the development of musical talents.

Ass. Prof. Artur Lorens, Ph.D., Eng, the Head of the Implants and Auditory Perception Department of the Institute of Physiology and Pathology of Hearing, depicted the results of the newest research in the perception of music in implant users. Dr. Elżbieta Włodarczyk, the Head of the Audiology and Phoniatrics Clinic of the Institute, explained how important the hearing is in the development of voice and speech.

The conference culminated in the announcement of the results of Jury’s deliberations by Prof. Ryszard Zimak. Over 30 journalists were present at the conference.