The patients have beaten their own Guinness World Record 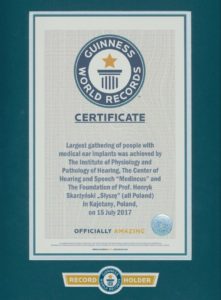 On 15th July 2017, on the occasion of 25th anniversary of the first in Poland cochlear implantation in a deaf patient that had been performed by Prof. Henryk Skarżyński, Kajetany were visited by grateful patients and their families. Altogether nearly 2 thousand guests visited the World Hearing Center on that day. The most important point in the program of this great reunion was the attempt to beat the Guinness World Record ‘Meeting in one place and time of the largest number of people with hearing implants’ previously set in 2012 also in Kajetany. The attempt has been successful with the number of 601 people!

– On the occasion of the Jubilee we have invited our patients and their families for a great reunion – said Prof. Henryk Skarżyński, the originator if the event. – The program included education workshops ‘I have an implant and what now?’, a block of lectures prepared by our physicians, psychologists, speech therapists and clinical engineers, and many attractions for the youngest guests. The most important facet from our point of view was 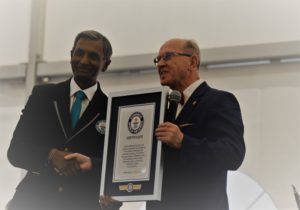 that patients would meet with a specialist, check the condition of their implant and find out about technological novelties in hearing implants. We are proud that Polish patients – as the first or one of the first in the word – have access to innovative clinical solutions. It is also very important that we meet and interact outside the follow-up visits in the Institute, because a hearing implant user must stay in touch with us for the rest of their life– adds Prof. Skarżyński.

A special commission chaired by Mr. Pravin Patel, an official judge representing the Guinness World Records, safeguarded correct course of the Guinness Record. The Commission has carefully counted all participants, checking also compliance with very restrictive requirements for the Guinness World Record, such as medical certificates confirming that one is an implant user, which many patients forgot to bring. Although many implanted patients were late and did not arrive before 12:00, when the record was closed, enough have come to beat the record. Judge Patel was full of admiration for patients and organizers:

– It is an honor to be with you here today, and I have a great pleasure to announce that you have managed to beat the previous Guinness World Record. You are incredible! Congratulations!