Patients of prof. Henryk Skarzynski were guests at the Presidential Palace

On February 24, 2018, a concert was organised at the Presidential Palace to commemorate the 200th anniversary of Frederic Chopin’s first public performance. The most musically gifted patients of prof. Henryk Skarzynski had the opportunity to listen to the unusual concert – among them: Anna Adamowska, Weronika Niczyporuk, Estera Łabiga, Daria Władzińska and Olaf Kaca. The Institute was represented by Paweł Doliński, Deputy Director for Organization and Development, who on behalf of the Institute’s Directory Board, had the honour to sign in the Memorial Book presented in the Presidential Palace on the occasion of the 100 years of Poland regaining independence. 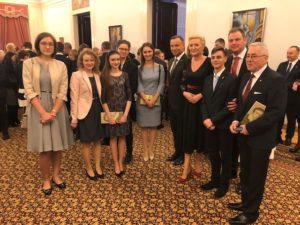 On the occasion of the anniversary of the first performance of our national composer and pianist, the President of the Republic of Poland Andrzej Duda along with his wife Agata Kornhauser-Duda, both accompanied by the ministers of the Office of the President, Halina Szymańska, Paweł Mucha and Wojciech Kolarski, listened to an extraordinary concert. Exactly 200 years ago, at the Presidential Palace, which was then called Radziwiłłowski Palace, eight-year-old Frederic Chopin played for the first time. This young but already genius pianist performed one of W. Jírovec’s piano concertos.
As President Duda emphasized before the concert, Frederic Chopin is the most renowned Polish artist and composer. In fact, he may be the most popular one, since his music can be heard anywhere in the world. Above all he was a great patriot who enriched our culture.

– I think that I can say on behalf of all participants that it was a truly beautiful event and an extraordinary distinction for each of us to be invited to the Presidential Palace and have a chance to accompany the Presidential Couple – said Ania Adamowska, who

thanks to the bone conduction device implanted by prof. Henryk Skarzynski gained new opportunities while performing with her folklore band. – Having a chance to listen to the concert was an important and historical moment for us as musicians. Today, we found ourselves exactly in the same place where back then 8-year-old Frederic Chopin appeared for the first time in public.
Apart from Chopin’s and Beethoven’s piano compositions – greatly performed by Aleksandra Świgut – the program also included songs by Shubert, Jirovec, Niemcewicz, Kurpiński and Lessel, which were performed by Urszula Kryger (mezzo-soprano), accompanied by a pianist Paweł Cłapiński.

It is worth to mention a peculiar fact – 200 years ago, apart from Chopin, also a 6-years-old Zygmunt Krasiński appeard on the stage, reciting poetry. To commemorate this event Jarosław Gajewski was reciting Krasiński’s poem.
After the concert, a small banquet was held. Our musically gifted patients, on behalf of the Institute, could thank Mr. President for the invitation to the Palace. They also had a chance exchange a few words with the Presidential Couple and take commemorative photographs. Last but not least, they were given the opportunity to get to know an unique figure of the musical world – a guest of honour, Krzysztof Penderecki. Beside the photos taken together, they also had some time to chat.
Young artists and patients of prof. Henryk Skarzynski, who came to the Presidential Palace to take part 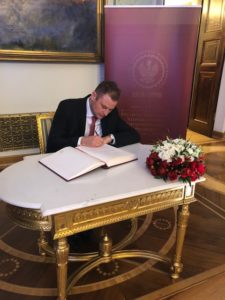 in this celebration, are the laureates of the 3rd edition of the International Music Festival for Children, Adolescents and Adults with Hearing Disorders ‘Beats of Cochlea’. It can be added that the initial idea of the Festival originated from prof. Henryk Skarzynski, who in 1992 performed the first in Poland cochlear implantation in a deaf adult. The aim of the “Beats of Cochlea’ is to show the world that through the achievements of modern science and medicine hearing problems are no longer obstacle to the development of professional musical activity or vocal talent.

The 4th edition of ‘Beats of Cochlea’ will take place this year, and the organizers wish to invite you to participate in instrumental and vocal Master Workshops, which will take place within the framework of ‘Music in Human Auditory Development’ Program. A series of workshops will be provided by professional musicians, artists and leading educators. 5 days of intensive Workshops will end with the performance, during which the participants will present the compositions they’ve been working on under the guidance of the Masters.