Prof. Henryk Skarżyński has been honored with a statuette „Viribus Unitis”

On 14 April 2018, in the Staszic Palace took place the ceremony on the 15th anniversary of the Award of Trust ‘Złoty OTIS’ (‘Golden OTIS’). The members of the Chapter also received the awards for long years of support, goodwill and work for the Award. Among the recipients of the special jubilee statuette „Viribus Unitis” was Prof. Henryk Skarżyński, who has been collaborating with the Chapter of the Award from its very beginning. 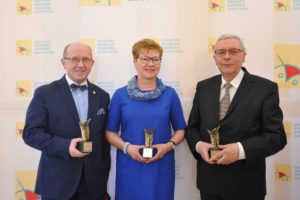 It is worth mentioning that for Prof. Henryk Skarżyński it is already a second jubilee award „Viribus Unitis”. Formerly, he has received a statuette in 2013, for the 10th anniversary of work uniting the communities of physicians, pharmacists, patients, pharmaceutical companies and media, and for the international cooperation policy.

‘Złoty OTIS’ is the only consumer award of Polish pharmaceutical market. It is awarded to the best OTC drugs chosen by patients by voting. For many years it has also been awarded to persons and NGOs working on behalf of improving the level of health services in Poland and internationally, to journalists promoting health knowledge and to non-medical companies for undertaking pro-health initiatives.