On May 2, the Flag Day of the Republic of Poland and the Day of Polonia and Poles Abroad are celebrated. During the ceremony in the courtyard of the Presidential Palace, Andrzej Duda presented state awards* to meritorious Polonia activists, as well as state flags to distinguished organizations. The Institute of Physiology and Pathology of Hearing was represented by prof. Henryk Skarżyński and director Witold Cieśla. Prof. Skarzynski received the flag and personal wishes for further professional successes from President Andrzej Duda.

-Our history has caused that Poles are spread all over the world, that they live on all continents. Today I want to thank the compatriots who live away from the country and yet who manage through their activities to have an influence on the Polishness – said President Andrzej Duda during the ceremony. 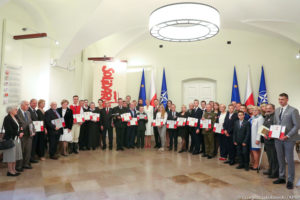 The president encouraged Poles to display their national flag in places they live. He also expressed hope that Poland will achieve many successes. – Long live the free, independent Republic of Poland! – emphasized President Duda. In a letter addressed on this occasion by the President to the employees of the Institute, we also read: (…) I am solemnly handing over the flag of the Republic of Poland to you today. Display it with pride and satisfaction as a manifestation of patriotic service and devotion to Poland, as an expression of Polish solidarity, as a symbol of the wonderful achievements of our nation, in which you also have a beautiful participation. I warmly congratulate this prestigious award. I pay tribute to you, wish you all prosperity and cordially greet all of you. It is worth recalling that the Flag Day of the Republic of Poland is a Polish holiday introduced under the Act of February 20, 2004, celebrated between national holidays: May 1 (called Labour Day) and May 3 (Constitution Day). On May 2, 1945, Polish soldiers conquering the capital of Nazi Germany put a white and red flag on the Victory Column – Siegessäule and the Reichstag in Berlin. In the years of the Polish People’s Republic, on this day, the state flags were removed after Labour Day, so that they would not be exposed on the day of the May 3rd, Constitution Day abolished by the communist authorities. In recent years, it has become common to wear a national cockade on that day. This custom was popularized by President Lech Kaczyński. It was continued by President Bronisław Komorowski, and now it is also done by President Andrzej Duda.