“The most beautiful thing we can experience is the mysterious. It is the source of all true art and science. He to whom the emotion is a stranger, who can no longer pause to wonder and stand wrapped in awe, is as good as dead —his eyes are closed.” On September 2, 2018 this quote of Albert Einstein accompanied the guests invited to gather in the performance hall of the Nadarzyn Center of Culture. It was a venue for the ceremony of awarding the Pearls of Culture, Science and Art of Nadarzyn Municipality. Among the first laureates of the Super Pearl were Irena Santor and Prof. Henryk Skarżyński, who received the award in recognition of his extraordinary scientific achievements, as well as a sign of respect and gratitude. 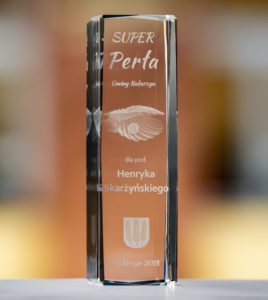 – Our municipality needs and appreciates persons, institutions, organizations that make Nadarzyn Municipality famous not only in our country, but also on the international forum, – said the Mayor Dariusz Zwoliński during his speech at the ceremony – Thanks to the people like you, dear Professor, we have become an attractive place to live, and also a welcoming localization for new investors. By giving my compliments to you, Professor, I am convinced that the Super Pearl statuette of Nadarzyn Municipality will not only be a sign of recognition of your achievements so far, but also another expression of our appreciation for your successes.

When handing the award the Mayor – Dariusz Zwoliński also thanked Prof. Henryk Skarżyński on behalf of an innumerable group of patients and their relatives whose lives were changed by him.

Receiving the award Prof. Henryk Skarżyński emphasized that it is very important to talk about Polish successes in every field.

– We need to make our society accustomed to a properly defined career. It is necessary to disseminate Polish achievements at the international, national and, of course, local level. In Poland, sometimes success is perceived as something suspicious. And it is not. The success of the people honored today originates from their hard work, sacrifices and taking risks. The success of the World Hearing Center team is the largest in the world number of daily performed surgeries to improve hearing. That is one thousand percent more than in any well-known American centers. Our Polish patients have access to the state-of-the art technologies, as the first or one of the first in the world. I am proud of this and we shall speak out about it.

Professor Skarżyński also added that he was very pleased with the fact that the World Hearing Center had been built in Nadarzyn Municipality, because for many years the regional and municipal authorities were very supportive of the Center’s activities.
This distinction has been awarded for the first time – and this year’s edition in a special way honors the people who make Nadarzyn Municipality famous throughout the world, and make the inhabitants very proud of them. The award was established to honor those who contribute to the promotion of the municipality in Poland and abroad and actively engage in the activities for the benefit of local community.

The ceremony was graced by a concert of the Heroes Orchestra.