Amazing performance of „Beats of Cochlea” winners in European Parliament

Professor Henryk Skarżyński – the pioneer of auditory implants in Poland and globally – together with his team had implanted almost 8,000 different types of auditory implants bringing generations of patients back to their families and professional activity. Initiating and implementing – at the Institute of Physiology and Pathology of Hearing – various programs for the treatment of deafness, enabled them not only to learn or work, but also gave them a chance to professionally deal with music. Patients of prof. Skarżyński sing, compose, play instruments and even record albums and perform concerts.

Thinking about the most talented patients for four years the International Music Festival of Children, Adolescents and Adults with Hearing Disorders “Beats of Cochlea” has been organized in Kajetany. All of its participants are the best ambassadors of what has been achieved in the treatment of hearing disorders through advancements in science and medicine. On November 27th 2018 outstanding winners of previous editions of “Beats of Cochlea” presented their musical and vocal skills in the European Parliament at the invitation of European Parliament. 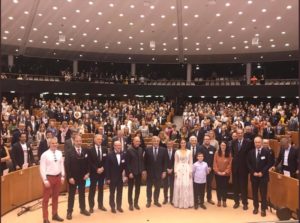 Before the performance of young artists Professor Henryk Skarżyński thanked President Antonio Tajani for the invitation and the opportunity to show that due to the achievements of modern science and medicine hearing problems are not an obstacle for patients to develop their musical passions. Professor also stressed that it is a great honor to be able to perform in front of such a distinguished European audience. The performance of young artists – ambassadors of medical and scientific achievements in the field of auditory implants and the achievements of the World Hearing Center was a great opportunity to popularize Polish science and medicine among European deputies, politicians as well as the European society. By using EU funds, the World Hearing Center was created and that is the place where the most hearing enhancement operations are being performed. Initiative of the Institute of Physiology and Pathology of Hearing and centers from Antwerp, Wurzburg, Innsbruck and Vienna resulted in many scientific programs and the creation of the Hearring group.

The performance took place on the occasion of the international conference entitled “European research and innovation in our everyday life” organized jointly by the European Parliament and the European Commission in the EU Parliament. The conference, which was opened by EP President Antonio Tajani, concerned progress in science, including medicine, issues related to cleaner energy and the latest engineering achievements, as well as EU-funded research projects that play a key role in raising the level of our everyday life quality.

Opening the Conference the President of the EP Tajani greeted the guests from Poland very kindly: – I give my voice to Professor Skarżyński, director of the World Hearing Center, who was the first in his country to implant a cochlear implant in the deaf patient. He will tell us about his achievements. Then we will listen to the performance of invited musicians.

The winners of “Beats of Cochlea” – Anna Adamowska-Czupryn from Poland and Arnau Pozas Saiz from Spain prepared special songs for this occasion. 10 year old Arnau performed the European Union anthem on saxophone, and Anna – ho plays and sings with the folk group Tekla Klebetnica which performs the native highland music, music of the Carpathians and Balkan melodies – sang and played violins with the accordion accompaniment a bundle of folk Carpathian melodies in her own arrangement.
The conference and the performance of “Beats of Cochlea” winners was honored with the presence of Carlos Moedas, Commissioner for Research, Science and Innovation KE, Heinz Faßmann, Austrian Federal Minister for Education, Science and Research, Luigi Naldini, Director of San Raffaele Telethon Institute for Gene Therapy, Bertrand Piccard, Ambassador of Good Will UN Environment, prof. Jerzy Buzek, chairman of the Committee on Industry, Research and Energy and many others.

The musical performance of “Beats of Cochlea” laureates is not the first presentation of Polish science and medicine achievements in the European forum. In 2007, with the perspective of the Polish Presidency in the European Union, the Institute of Physiology and Pathology of Hearing organized the exhibition “I hear-I see-I speak – the basis for communication and integration of the young generation of Europe”. That was an opportunity to show impressive achievements of the Institute and to present multimedia telemedicine programs for widespread hearing, sight and speech tests. At the opening the Institute exhibition in European Parliament deputies Ryszard Czarnecki and Bronisław Geremek said: We are very happy to welcome the Institute of Physiology and Pathology of Hearing in the European Parliament. They are a great proof that Poland has got its centers of excellence where science and practice serve the needs of citizens. The Institute with its creator professor Henryk Skarżyński and his great team are one of the best prominent symbol of Poland in the world. He brings fame to our country and testifies well to Polish medicine – its research and practice. With the highest admiration.

As part of the exhibition a series of dozens of posters informing about Polish medical products and devices awarded in international competitions, as well as Polish clinical experience was presented.