On 24 May 2019 in Lisbon, Prof. Piotr H. Skarżyński, deputy head of the Department of Teleaudilogy and Screening Tests of the Institute of Physiology and Pathology of Hearing was elected as an auditor of the European Federation of Audiology Societies (EFAS).  Meanwhile in recognition of his achievements in Poland, on 4 June 2019 he was awarded the title of Supertalent in Medicine 2019. 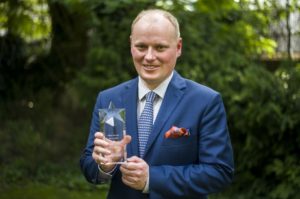 The European Federation of Audiology Societies brings together audiologists, laryngologists and hearing care professionals from 35 countries. The aim of the Federation is to enable exchange of information and experience in the fields of education, training, hearing assessment, screening and research. This cooperation benefits patients with hearing disorders and also encourages research collaboration among scientists.

It is worth adding that Warsaw hosted the 10th EFAS Congress 2011, which was attended by numerous representatives from other continents and dedicated to diagnostics, treatment and rehabilitation of hearing and speech disorders. Almost 800 physicians and scientists from different corners of the world participated in the congress, presenting the latest research findings and the best clinical practices.

The Supertalents competition organised by “Puls Medycyny” medical website recognises young physicians up to the age of 39 who enjoy authority in their community and among patients and can boast documented medical, scientific or organisational achievements.   These are young people who have made considerable scientific, clinical, educational and organisational contributions.

Supertalents in Medicine is a very prestigious competition that has been organised by “Puls Medycyny” since 2012. Its aim is to select and reward the leaders among young generation physicians who, thanks to their knowledge, skills and predispositions, will have impact on the changes in the Polish health care sector in the next years. The winner was chosen by a jury made up of 10 specialists in various fields. The candidates were assessed in three categories: scientific achievements (such as grants, scholarships, publications, awards); engagement in public activity (i.a. charitable activity, activity in federations, associations); prospect for further development (chances for impact on the health care sector in the near future).

Prof. Piotr Henryk Skarżyński – otorhinolaryngologist, child otorhinolaryngologist, implemented 23 national and international research programs, actively participated in numerous conferences (over 1500 speeches), co-author of over 800 scientific publications.    A reviewer in 23 prestigious journals and an active member of 22 scientific societies, fulfilled managerial functions in 9 of them (i.a. Vice-President and Institutional Representative in the International Society for Telemedicine and e-Health (2019-2021), earlier Representative Board Member (2016-2018)). Since 2018, he has been a member and co-founder of World Hearring Forum under World Health Organization (since 2018), a member of Hearing Committee, American Academy of Otolaryngology–Head and Neck Surgery (since 2018). In 2017, he became Vice-President of Hearing Group (Comprehensive Hearing Implant Centers) and secretary of the Management Board of the Society of Polish Otorhinolaryngologists, Phoniatrists and Audiologists. He is also Regional Representative of Europe in the International Society of Audiology (2016-2018), Member of Congress and Meeting Department in the European Academy of Otology and Neuro-Otology (since 2014). Between 2010 and 2014, he fulfilled a prestigious and honourable function of Vice Chairman (2010-2012) and Board Member (2010-2014) in Junior European Rhinology Society. He is a member of World Hearing Forum under World Health Organization (WHO).

Prof. Piotr Skarżyński also fulfils three important functions in national organisations: an expert appointed by District Court Warszawa-Praga in Warsaw in the field of laryngology, specialisation of otolaryngology (2017–2018); member of the State Examination Committee in the field of Otolaryngology (since 2017) and a delegate to the District Congress of Physicians of the District Chamber of Physicians in Warsaw, 8th term (2018–2022).

Prof. Piotr Skarżyński has substantial, original and outstanding scientific achievements, which also represent a significant clinical value. It is worth stressing that during his scientific career spanning only 10 years he published 663 scientific works, including monographs and chapters, with the total IF being almost 150.  It is the highest number among the finalists of the Supertalents Competition.