On 9 July 2020, during the celebration of the 100th Anniversary of the Polish Olympic Movement at the Polish Olympic Committee (PKOL) headquarters in Warsaw, Prof. Henryk Skarżyński received the commemorative award. The President of the Committee – Andrzej Kraśnicki – presented the award to Professor Skarżyński. PKOL was established in free, sovereign and independent Poland. The fact that it was immediately accepted as a member of the International Olympic Committee was a recognition of the Polish State by the international community.

– The 100th Anniversary Award of PKOL is an expression of our recognition and gratitude for medical assistance to Polish athletes and respect for the scientific achievements of Prof. Henryk Skarżyński. Prof. Henryk Skarżyński is an outstanding figure in medicine worldwide- an excellent doctor, a man and a friend of the Polish Olympic Committee – said Andrzej Kraśnicki – the President of PKOL. 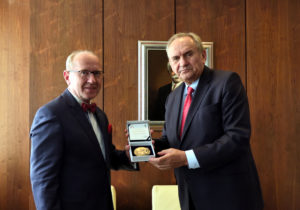 Prof. Henryk Skarżyński, M.D., Ph.D., dr. h.c. multi, is a world-renown oto-surgeon, specialist in otorhinolaryngology, audiology and phoniatrics, pediatric otolaryngologist, national consultant in otorhinolaryngology. Prof. Skarżyński is the first surgeon in Poland to perform cochlear implantation (1992), brainstem implantation (1998), and middle-ear implantation (2003). In 1997, he developed the first in the world standard partial deafness treatment and auditory debris preservation program. In 2002, he operated the first adult patient in the world with partial deafness, and in 2004, the first child with partial deafness. This method is considered his specialty known as “Skarżyński’s method.”

For 25 years, Prof. Henryk Skarżyński himself, and for 17 years together with the whole team, has been performing the highest number of surgeries to improve hearing in the world. He authored and co-authored 18 national and international patents. The Professor is the author and co-author of over 1,400 publications and over 3,200 scientific reports from international and national conferences, conventions and symposia. He conducts extensive educational activities for students and physicians in Poland and abroad. Prof. Skarżyński performed demonstration operations for over 4,500 professors, department heads and other specialists during 54 specialized international oto-surgical pieces of training called “Window Approach Workshop,” as well as during continental and international conferences and conventions held in Kajetany and Warsaw. Professor carried out demonstrative operations in over a dozen countries in Asia, South America and Europe – he conducted over 1,000 of them. Prof. Henryk Skarżyński is Honorary Prof. of Provo University, UT USA (1998), doctor honoris causa of the Academy of Special Education (2011), Warsaw University (2012), Maria Curie-Skłodowska University (2014). Associate Prof. of the State Medical and Pharmaceutical University Nicolae Testemitanu in Moldova (2013), Honorary Prof. of the National Center for Mother and Child in Bishkek, Kyrgyzstan (2016). Prof. Skarżyński is a member of over 20 most prestigious international and eight national scientific associations – Corresponding Member of Polish Academy of Sciences, among others. Laureate of over 400 state honors, academic and medical community, the Church and the media awards. The greatest achievement in scientific, clinical and didactic activities was the concept creation, construction and the launch of the World Hearing Centre – the world’s largest scientific and clinical center. For the last 17 years, Professor and his have been performing the highest number of operations improving hearing in the world. He himself has performed over 200,000 of them.

It is worth mentioning that the Polish Olympic Committee was established on 12 October 1919 in Kraków under the name of the Committee for Poland’s Participation in the Olympic Games. It was an association of tourist, athletic and skiing activists. Prince Stefan Lubomirski became the first President, and the Chief of State, Józef Piłsudski, assumed the patronage. The outbreak of the Polish-Soviet War interrupted preparations for the red-and-white team participation in Antwerp. The Poles debuted at the Olympics four years later in Paris. In the 1924-2018 Olympic Games, Polish athletes won a total of 305 medals. Irena Szewińska, now deceased, won the most medals. Robert Korzeniowski is a four-time Olympic champion in race-walking.

Currently, the Committee is primarily engaged in organizing the participation of the Polish Olympic Team at the Olympic Games, as well as, promoting the Olympism, propagating sport and representing Polish sport in international organizations, including the International Olympic Committee.